A documentary about Savoy, Chamonix and the Mont Blanc massif. (BR 2000)

Mont Blanc, the highest peak in the Alps, was first climbed in the summer of 1786. The birth of mountaineering. The glacier world of the Mont Blanc massif is one of the most beautiful landscapes on earth. Hochsavoien is a land for the active, for dreamers, for connoisseurs. The film shows alpinists in the massif of Mont Blanc, portrays the people of the valleys.

Hieronymus Bosch and the Fantastic in Art

Hieronymus Bosch and the Fantastic in Art

A documentary film in 2 parts for ARTE about the medieval painter Hieronymus Bosch.

The painter Jerome van Aaken, called Hieronymus Bosch, lived in the Dutch town of Herzogenbosch between probably 1450 and 1516. Today we see in him an eccentric painter of religious visions, an exceptional figure in the painting of Flames and Europe. The fascinating paintings have a tremendous depth dimension that inspired psychoanalysts such as Carl Gustav Jung and artists such as Max Ernst and Salvador Dali in the 20th century. Recent discoveries make the figure of this painter even more enigmatic, according to which he perhaps cannot be solely responsible for the fantastic pictures.

In two films, “The Inventor of the Unconscious,” and “Dream, Drive, and Self-Knowledge,” Stephan Bleek created a portrait of the painter and his oeuvre that, through close-ups, brings Bosch’s richly detailed paintings to life in a dense and direct way.

The first part deals with the main work “The Garden of Desires,” now in the Prado Museum in Madrid; the second part presents the “Last Judgement,” now in Vienna, and the Lisbon “Temptation of Anthony,” as well as the painting “The Hay Carriage.

The human image of Bosch becomes clear: Man is a fool who is driven aimlessly through the world by desires and obstinacy, without concern, reason, wisdom or meaning. His pictures set against the instinctive nature of man the self-knowledge, the wisdom about which alone the way to happiness and wealth can be found. Bosch’s most important legacy is the tremendous ingenuity with which he stages this world view. Many of these ideas are alien to us and at the same time surprisingly present. 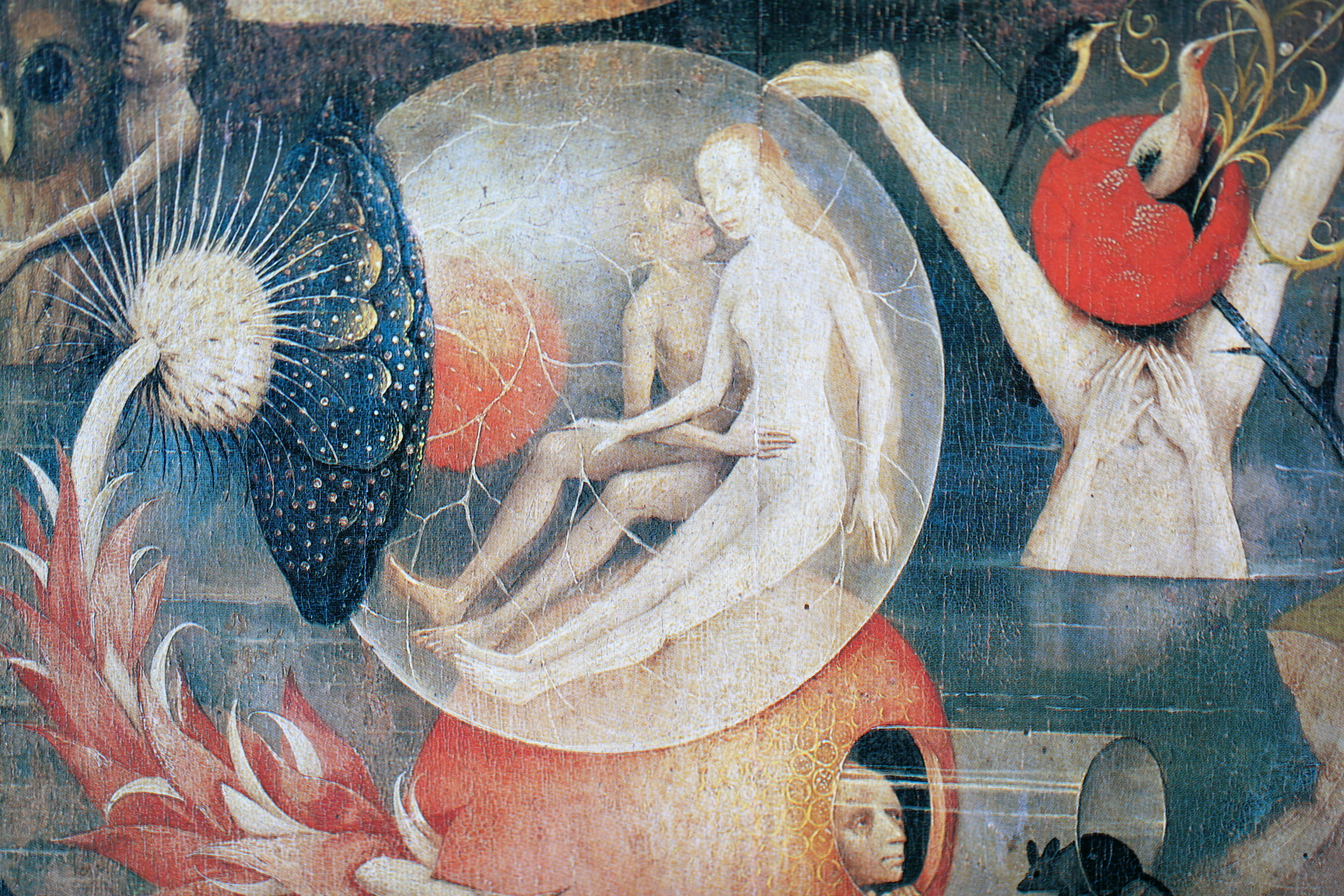 God is the Light – Chartres

God is the Light – the Cathedral of Chartres

In summer 1996 we came back to Chartres for the first time after many years. The cathedral had already fascinated me during my first longer stay in France in 1971. Now, with the plan to shoot a one-hour documentary film for Bayerischer Rundfunk in my luggage, the encounter was many times more intense. 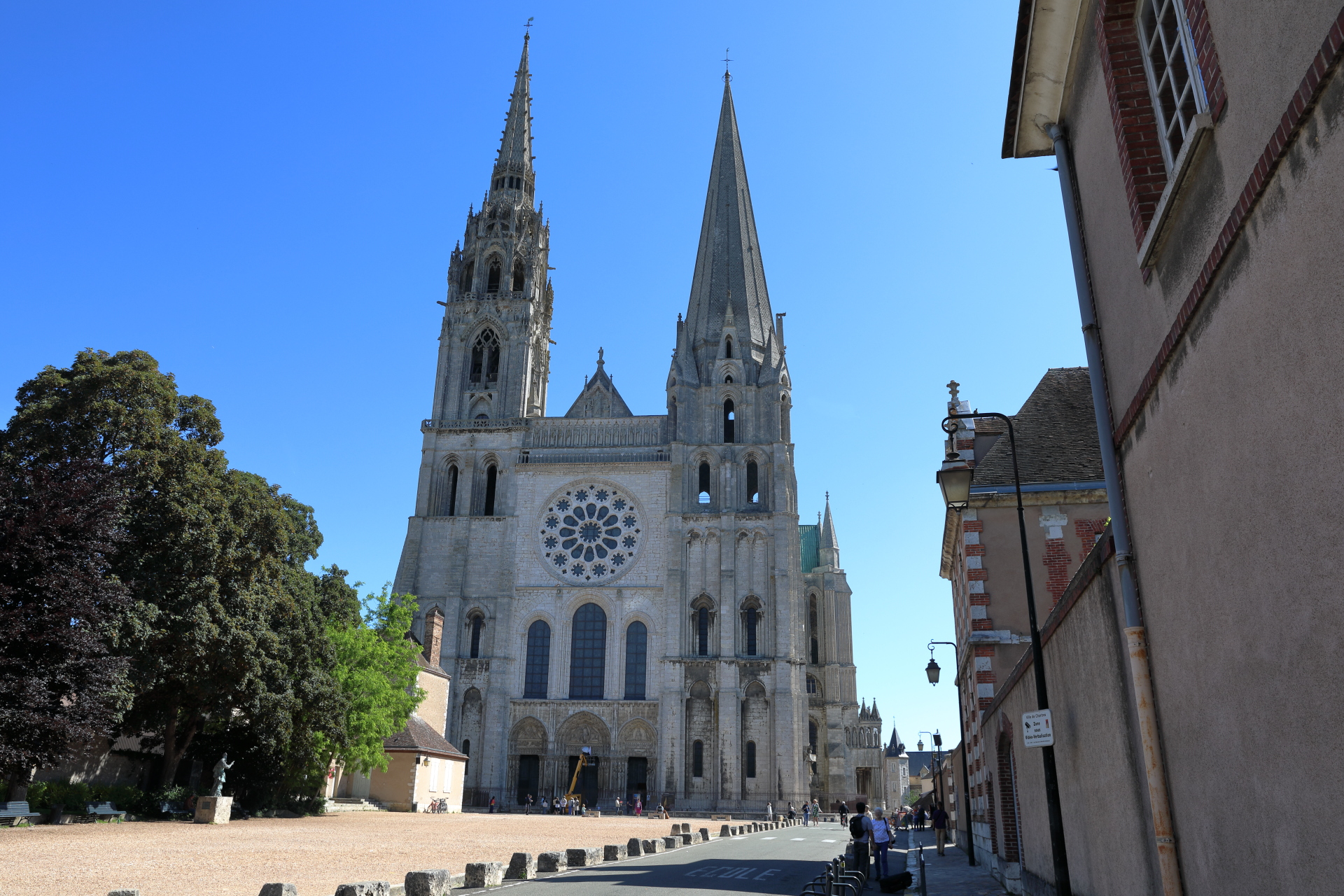 B&B with a farmer family

We moved into our quarters near Chartres at a very nice B&B with a farmer family near the town. that sounds romantic, the old farmhouse was it too. And the young family with two small children gave us a warm welcome. Agriculture near Chartres means large-scale cultivation of grain. Large machines belonged to the farm. The harvest was imminent. So not a trace of quiet rural seclusion.

The end of the film excerpt has a special story. It shows the cathedral from a place to the east where the sun goes down directly above the church in the evening. It was not easy to find this point on a small road 10, 12 kilometres to the east of the cathedral, especially as the research took place in June, but the photographs were scheduled for September. But we found the place, it is on one of the paths that students from Paris take every year on Palm Sunday on their pilgrimage to Chartres.

The pilgrimage on Palm Sunday

When we filmed the pilgrimage on Palm Sunday 1997, over 5,000 students took part in the pilgrimage. When the pilgrims arrive in Chartres, they gather with their palm branches in front of the closed portal. Cardinal Lustiger opened the royal portal of the church with hard blows and the crowd of pilgrims advanced into the huge nave – symbol of the entry of Jesus into Jerusalem. An incredibly deeply moving experience. The cameraman Philipp Müller “swam” with his Steadycam in the middle of the students streaming into the church. To the displeasure of the Cardinal, he turned from the altar when the mass had already begun. These are the moments when the director gets into conflict. We were allowed to disturb, yes had to disturb, but better from the background. But the really spectacular shots are at the front. 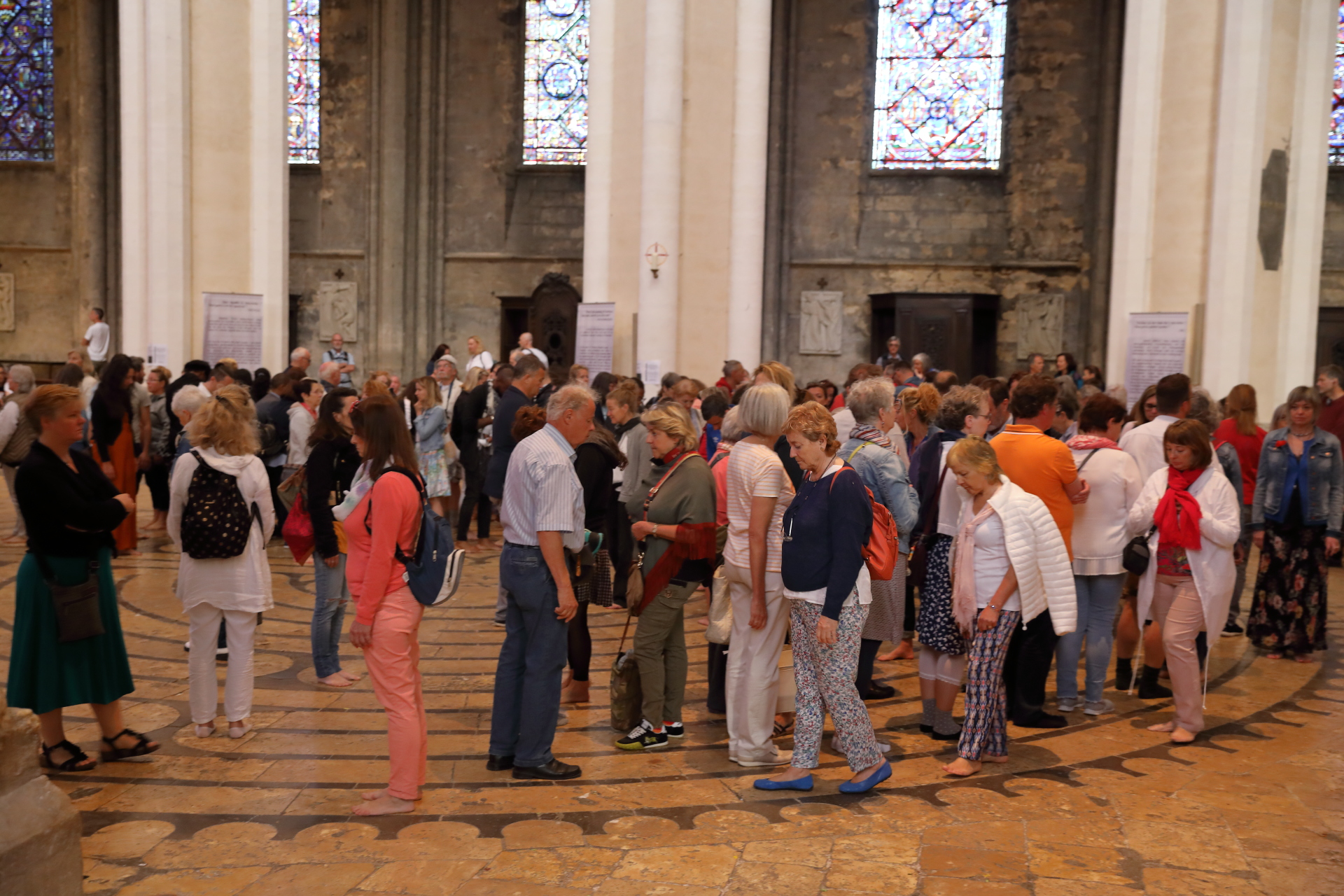 On one day in September 1996, with some helpers, we managed to get all the chairs out of the church to film the great labyrinth. We had a 10 meter high camera crane into the cathedral. The use of a drone, at that time there were just the first models, had been forbidden. The reason was that a team of the BBC had steered a drone into one of the irreplaceable church windows. The cameras still weighed a few kilos and a few panes broke. But fortunately they were not the most valuable “Bleu de Chartres” specimens. Filming the labyrinth with the heavy crane was a really difficult task. At the end there was the salvation we deserved – the shots from a height of 10 meters were excellent. The mysterious labyrinth invites us to a spiritual journey. Who am I? What is the meaning of life?

We also studied glass production at that time and finally filmed it in St. Etienne in the south of France. Cobalt, antimony, copper and iron in a sodium melt produce an intensely luminous blue glass. Only in Chartres can you still see this original glass from the 12th century. Today the restorers are very careful to repair damaged glass with new panes made according to the original recipes. But most of the glass surfaces in the cathedral are original. “God is light” – the coloured windows of the cathedral shining in the morning light create an incomparable atmosphere.

Filming is also work with light. At the end of the day, when the Jesse window in the cathedral of Chartres begins to glow, our soul receives the deep contact to that which drives and moves us in our innermost being.

The film “Chartres or the Gothic Spirit” has been shown on various ARD channels and in other European countries. In France, the film by Ulrike and Stephan Bleek was also included in the film programme for schools. 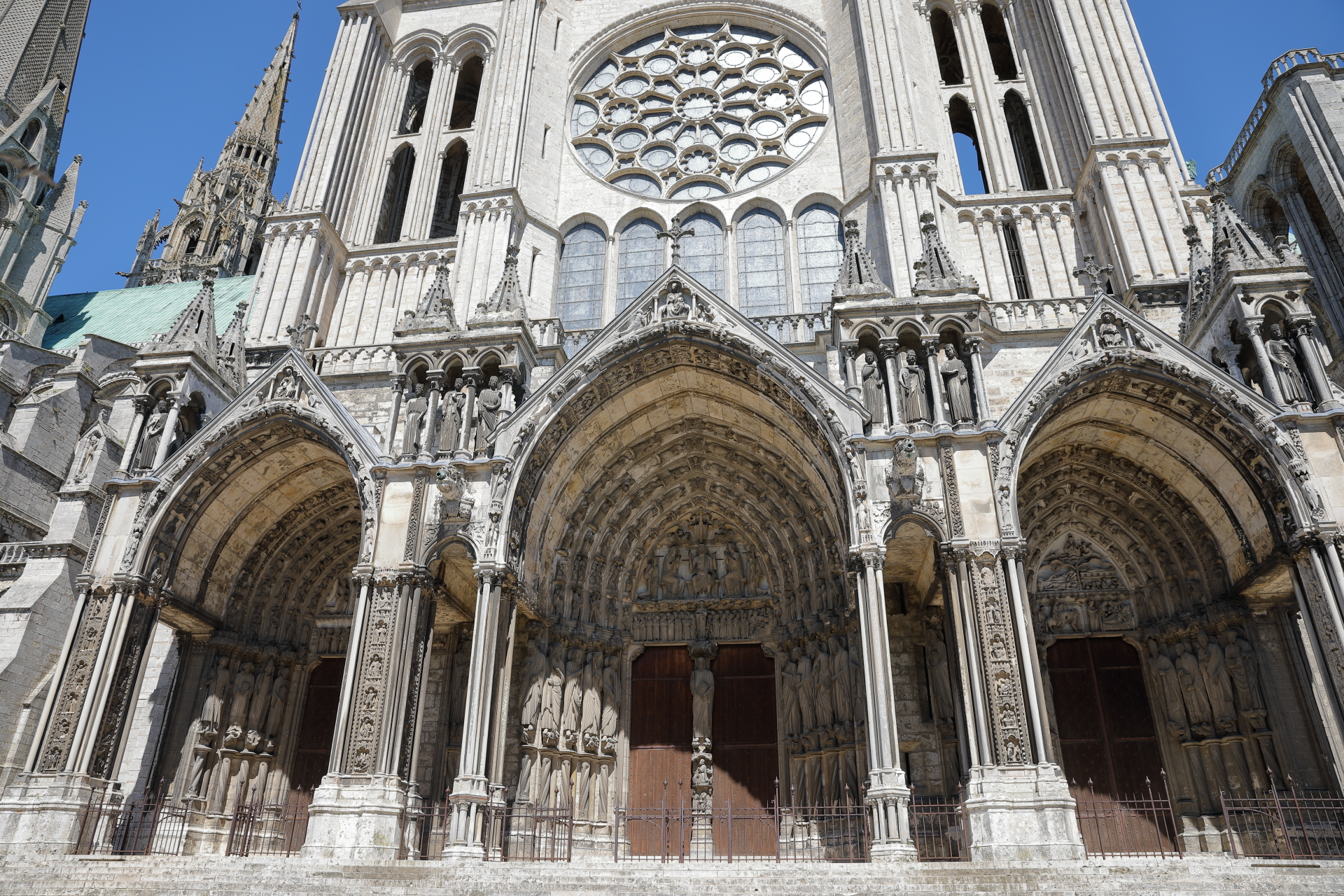 The Places of World Cultures – Chartres and the Gothic Spirit

A documentary about the cathedral of Chartres (BR 1997)

Pictures of a landscape: The Maritime Alps

A documentary about the French Maritime Alps. (BR 2001)

Passion, faith, sensuality. Rubens and the Art of the Baroque

Passion, faith, sensuality. Rubens and the Art of the Baroque

A film about the life of Peter Paul Rubens. Rubens is credited with more than 2000 paintings and thousands of drawings. An unimaginably great life’s work. In this abundance everything seems contradictory: the pious and greatest religious artist of the epoch, the voluptuous painter of archaic instincts, the bourgeoisie and art entrepreneur. A powerful, wild and affective genius. The bubbling creative, open to the deepest passions. Stephan Bleek’s film tells the story of Rubens’ life. Filmed at original locations.

Raffael – the Rebirth of Arts

A documentary film about the Renaissance painter Raphael. (BR 2000)

The name Raphael means the rebirth of art. Vasari calls Raphael a “mortal god”. The artist’s imagination transcends the usual view of things, turning the image into a work of art. The film by Stephan Bleek shows the life and work of the Renaissance painter Raffel von Urbino.

A documentary film about the Maxhütte steelworks in Sulzbach-Rosenberg, which has been shut down today. Steel workers and engineers tell the story. (BR 1999)

Written and directed by Stephan Bleek

The work in the hut shapes special people. “We have grown together with the hut” says the master smelter Max Hufnagl, who looks like an alien in his silver fireproof clothing. “The work welds us together”. “It’s always fascinating what’s going on here, it’s got something,” adds the young engineer Eike Schmilinsky. Scenes shot at the blast furnace of the Maxhütte. Stephan Bleek’s film shows the production processes of a steelworks from the blast furnace to the rolling mill, told with original sounds by the workers and engineers.

Theaters of World Cultures: Florence and the Spirit of the Renaissance

Florence and the Spirit of the Renaissance

A documentary about the Florence of the Renaissance.  (BR 1998)

Pictures of a landscape: The Haute Provence

A documentary about the Grand Canyon du Verdon and Haute Provence. (BR 1997)

Pictures of a landscape: The Durance

Shepherd at the Durance Picture: Bleek

A documentary film about the Durance. People and Landscape in Southern France (BR 1997)

Written and directed by Stephan Bleek