How Silicon Valley envisions the future in 1967

In retrospect, it usually seems rather funny how people once imagined their future. In contrast, the film A.D. 1999, made in 1967, shows an astonishing technological vision. It accurately predicts the future of life with the computer at home in many respects. Most of the technological ideas in the film come from NASA. We see how important the Apollo program is for today’s world. 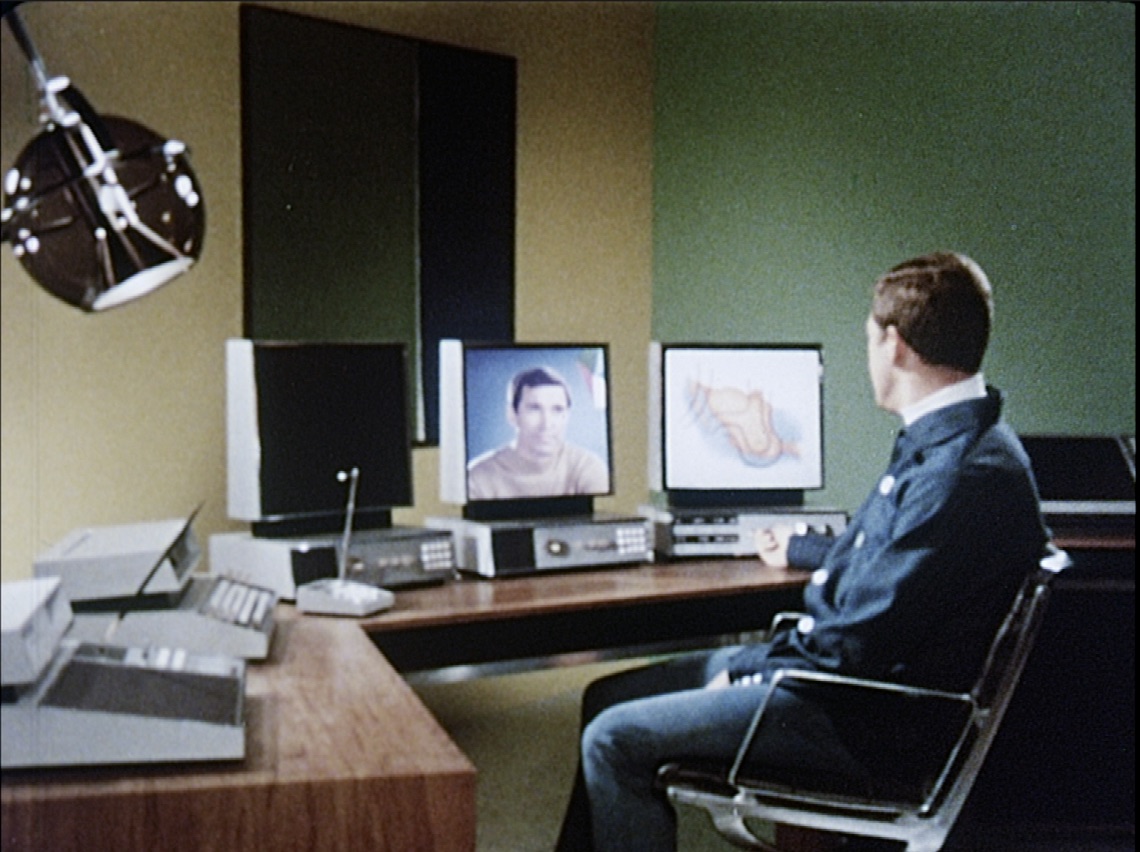 The film shows the “House of the Future 1999”. A vision of what life will be like in the 21st century. Large flat screens in the office, children’s room, living room and kitchen. A central home computer with a network connection, video telephony, e-learning or home shopping. In contrast to the mostly completely unrealistic science fiction films, this vision of the future is not too far away from our life of today. A server IT with terminals is presented. Functions such as video telephony, home shopping, private finance or education are running on terminals with only one function at a time.

Today, on the other hand, we have multifunctional devices that can handle several functions. But the decisive and fascinating thing is the prediction of the applications themselves. And even today, architecture, house energy and utilities have not been developed as the film predicts. The power of the future apartment comes from a fuel cell that supports precise controls of energy consumption. The apartment is built from honeycomb-shaped individual modules, which could be supplemented with additional honeycombs depending on the size of the family. We see the realized dream of a self-sufficient American single-family house. It lies solitary in a beautiful, dry coastal landscape of California. The fact that the fuel cell also produces drinking water is therefore very advantageous in this climate.

The first film clip starts at a beach. How will we live in the 21st century? 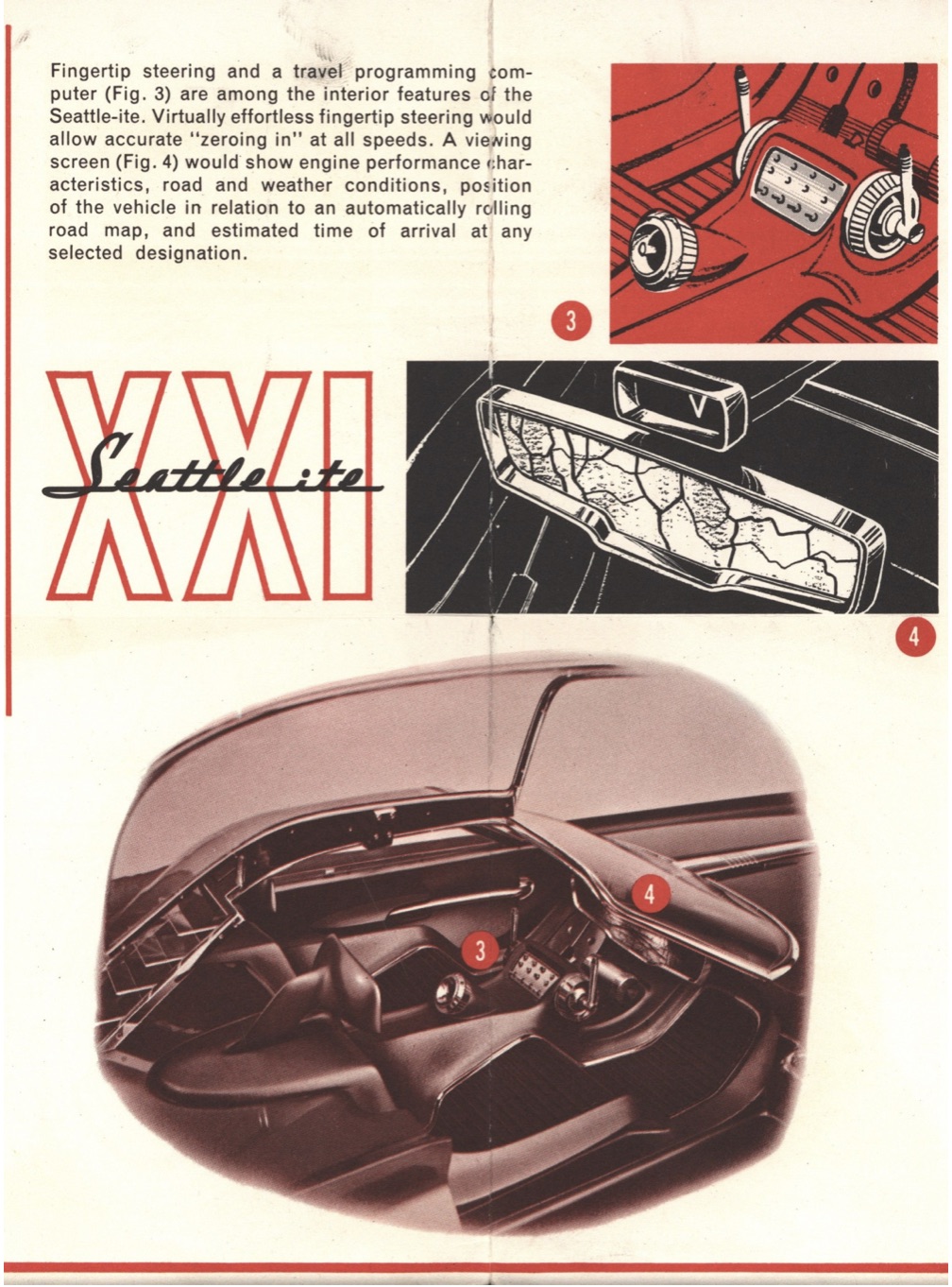 Mobility of the future

The car in the movie is a scoop! It is a Ford Seattle-ite, one of the great concept cars in history, which Ford presented at the “World Exposition of the 21st Century” in Seattle in 1962. The first thing that stands out are the four front wheels, which were designed to significantly improve the efficiency of traction and braking. The entire drive part of the car could be separated from the passenger cell in order to couple the passengers with other driving systems.

Inside, the car no longer has a steering wheel. It has a computer that programs the itinerary. The glass roof is thermochromic, so it can absorb heat automatically. The car is steered with fingertips. A screen shows the engine power, road and weather conditions and the position of the vehicle. An automatically rolling road map is not yet a navigation device of today, but the concept is the same. The engineers are already anticipating the self-driving car. This car is powered by a fuel cell. Or with a compact nuclear fusion drive.

At the time, nuclear fusion was seen as a safe and sustainable source of energy, but of course the enormous problems of plasma technology were not seen. Nuclear technology is completely unrealistic in cars. The ideas, however, like most of the other examples in the film, come from space travel. And the fuel cell is still the most important drive concept for the future. 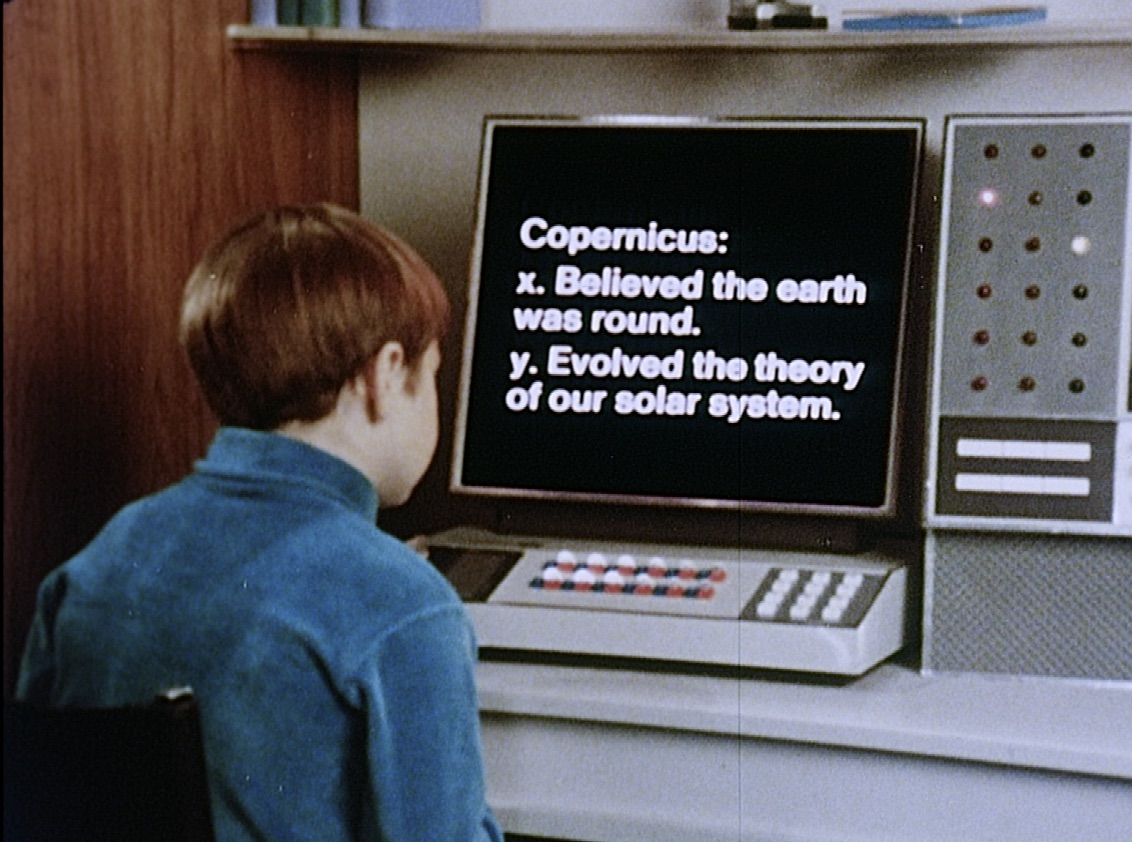 The family of the 21st century

The family depicted in the film belongs to the white American middle class. Michael, 45, is an astrophysicist, Karen, 43, a housewife, artist and part-time employee. Their only son James is 8. They live the dream of a modern American family. The apartment is spacious, the building services are controlled by computers. Michael works in his home office, his computer is networked with the laboratories of NASA. He can talk to colleagues via video phone.

James has to learn. He watches a film about the moon landing on a large screen. The moon landing is also still the future. The real landing of Apollo 11 will only take place two years after the film was made. But the film people know their stuff. Their client is one of the companies working on the Apollo program. James’ father was already working on a Mars project in 1999. NASA actually expected to land on Mars in only 30 years. Of course James also learns on the computer. The computer trains his knowledge of physics via multiple-choice questions. In the “Space Age” of 1967, astrophysics is the leading science of the future. 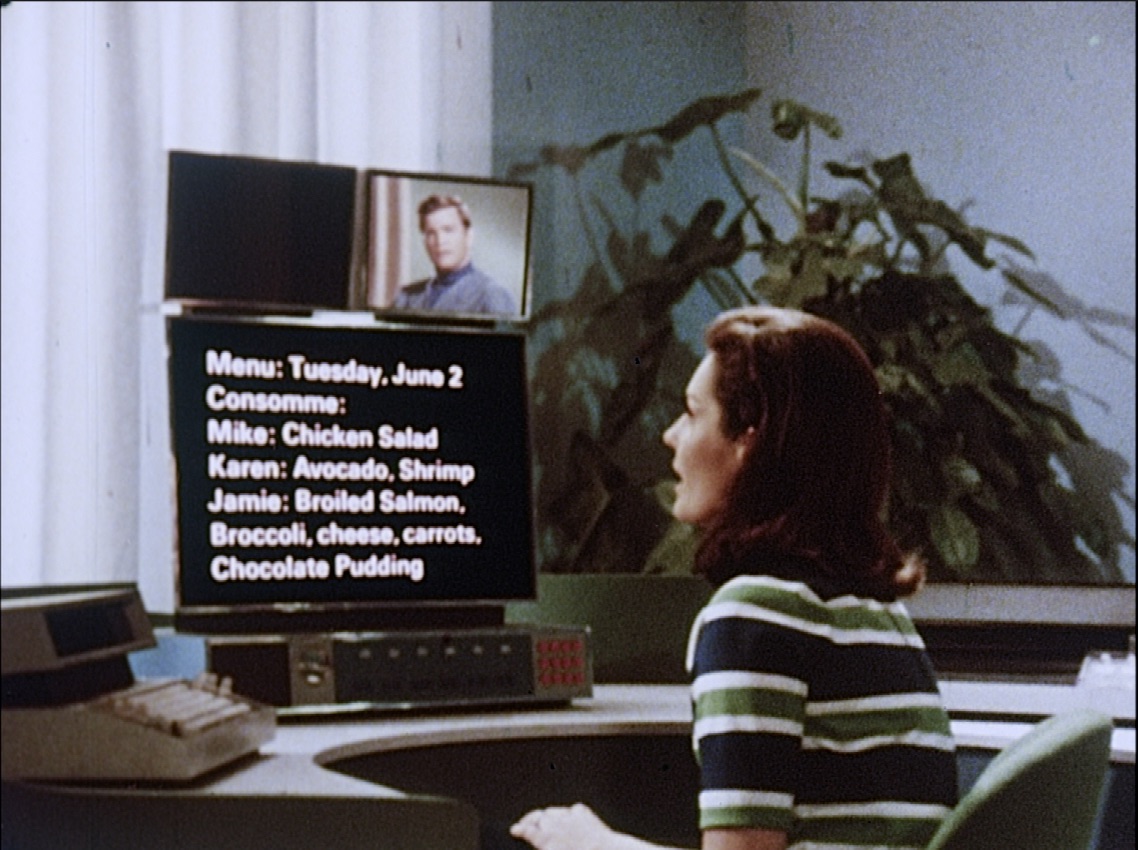 The computer suggests the lunch menu. Mother Karen is responsible for the household. So, sociologically speaking, we are not confronted with any particularly surprising visions of the future. A classic home of one’s own, classic roles of man and woman. But in return, all the more technical support. Father and son communicate their wishes via video telephony. The computer calculates the exact number of calories and warns the individual eaters to avoid too many calories. The menu is reduced until the amount of calories is correct. This is the way modern health apps work today.

The computer takes the selected menu from its stock of frozen ready meals. The portions are thawed in the microwave, heated and ready. To illustrate the speed of this modern cuisine, the boy is counting down a countdown – just like the NASA rocket launches.

In the film, the residence is referred to as the household of Space Age. Each technical application is imagined as its own device of considerable dimensions. So the house mutates into a large control room. This entertaining vision of a future comes quite close to today’s reality. However, today we have individual devices that execute and control a variety of functions and applications. 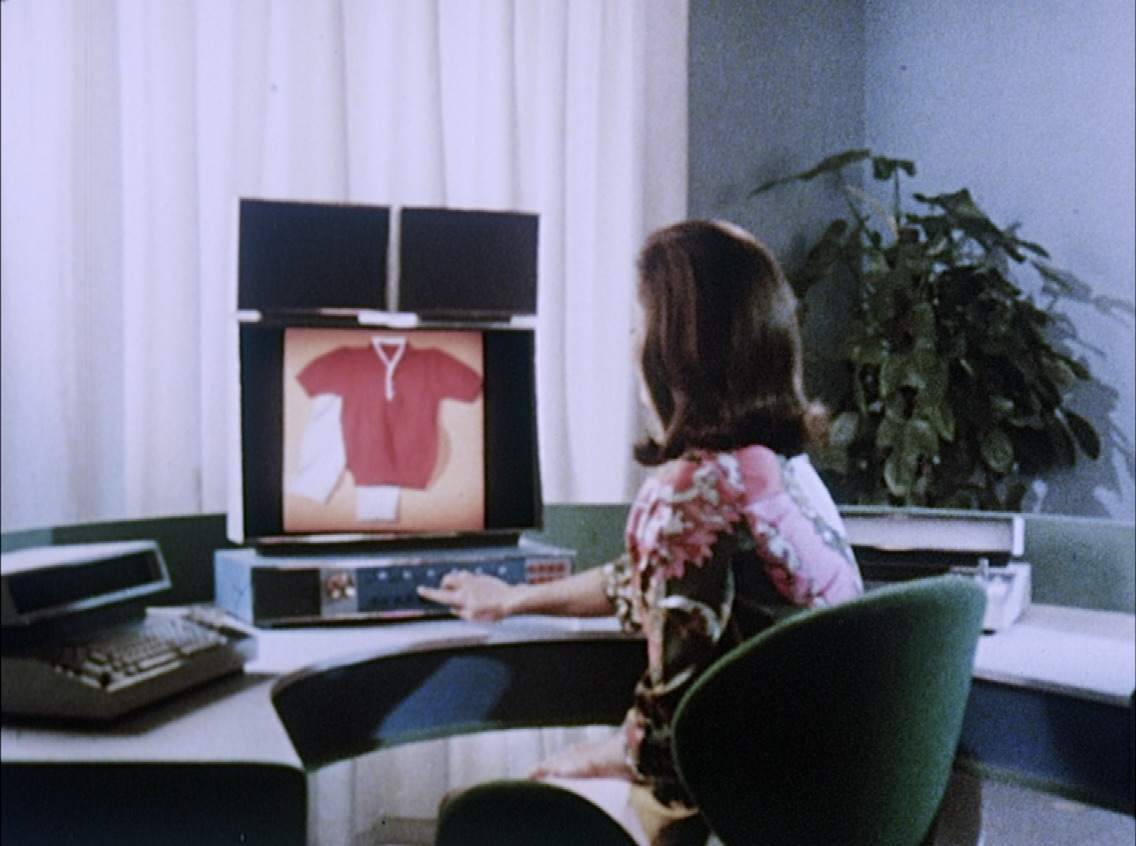 Home shopping is not missing either. As early as 1967, engineers imagined the model of the Internet connection to the fashion store of choice and realized it in their film. The Amazon of the 1960s still seemed somewhat clumsy – but at that time, after all, the majority of mankind had no idea of home computers, the Internet or anything similar. The visionaries around NASA knew things their contemporaries couldn’t even dream of. 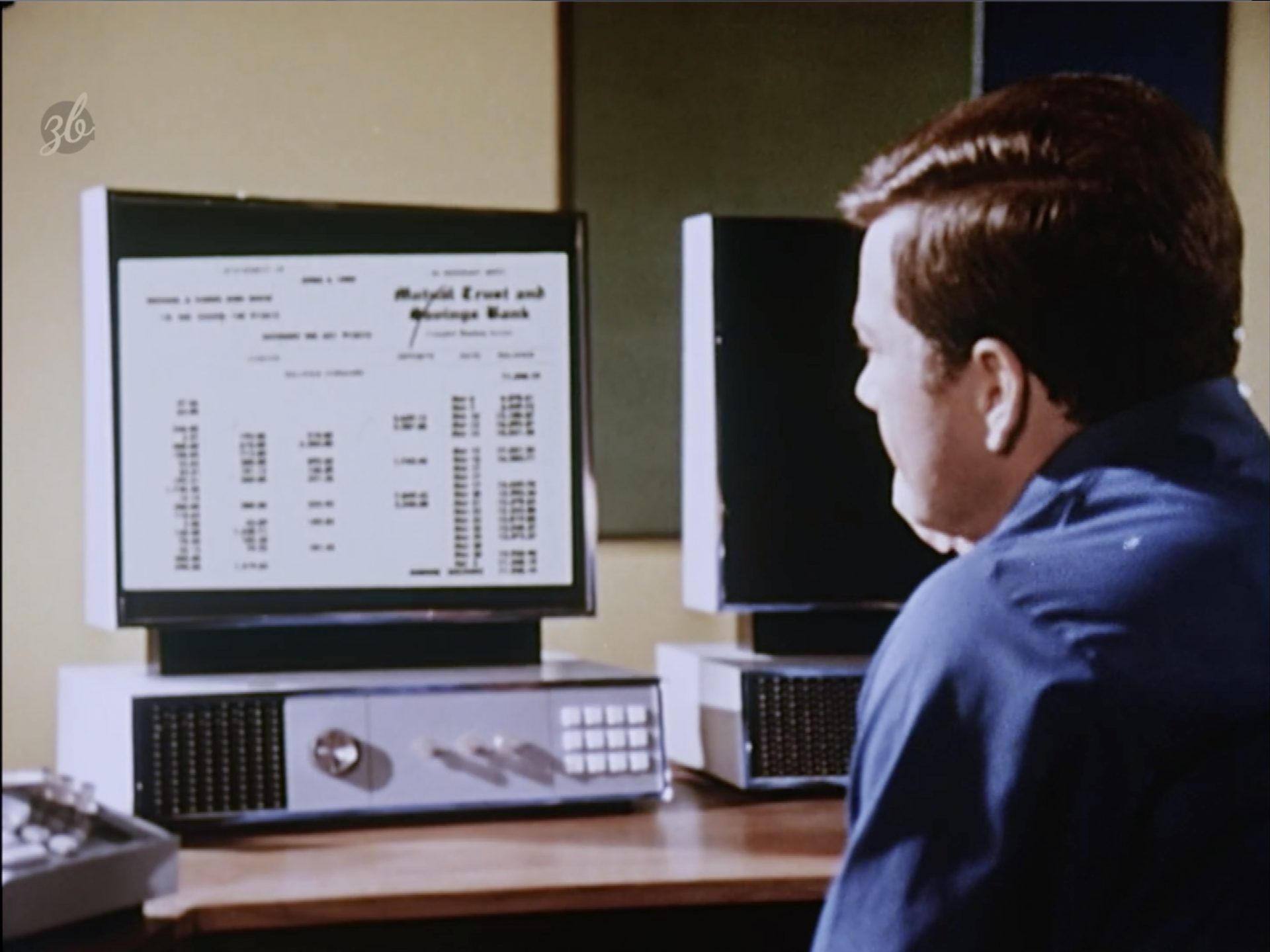 The bill is presented by the home office to the husband. Here, too, there are revolutionary ideas for the time. The home computers are connected to the bank, the account statements are sent online to the house. In 1967 we were well away from any practical application of these ideas. However, the military and researchers are already working on their first pilot projects. In the USA, the course has already been set for the development of the Arpanet, from which the Internet will develop two decades later. Today, much of what is shown here for 1999 has become reality. Of course, the technical devices have developed optically and also from the technology inside in a different way than can be seen here. But some applications have been accurately predicted. 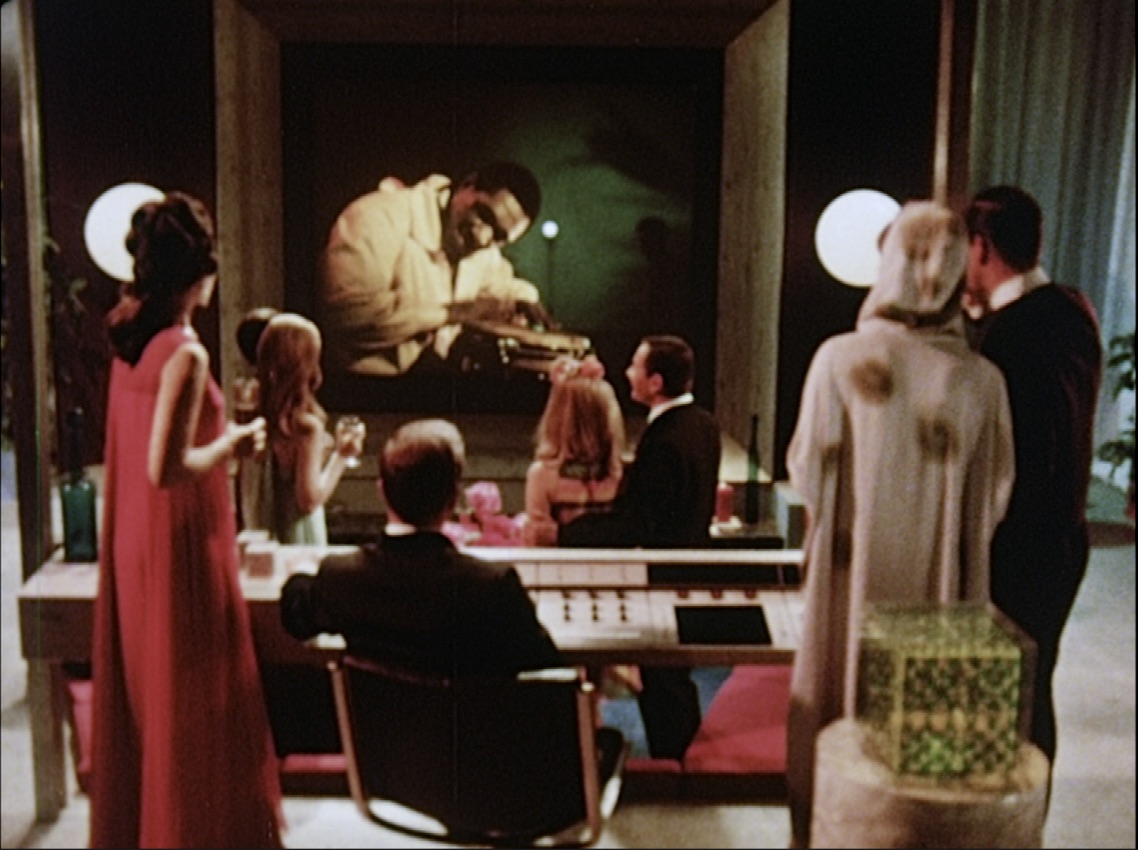 The technology used to power the house is also a projection of technologies from the Apollo programme. Because alkaline fuel cells have been developed for the Apollo spacecrafts. In addition to electricity and heat, these cells also produce drinking water. This is exactly how the engineers imagine the central energy supply of their house in the film. A project for a house in a far-off region, without a supply network. The dream of a self-reliant life, networked with society only via computers. So perhaps a training for the colonization of Mars, a project in which Michael is involved. Fuel cell systems are on the advance in today’s building technology. The transformation of energy systems, especially in the transport sector, will hardly be possible without this technology.

The living room with photochromic window panes also shows a technology that is increasingly being used today. Thermochromic layers form a self-regulating overheating protection for windows and facades. They allow light and heat to enter at low outside temperatures, but reflect radiation at higher temperatures. NASA has also developed this technology. It protected many sensitive parts of the Apollo spacecrafts from the extreme temperature fluctuations in space.

Today, darkening and energy absorption via thermochromic window glass is one of the technologies of the future in building technology that is now ready for series production. The window glasses can automatically and energy-saving regulate the climatic conditions in rooms with large glass surfaces. 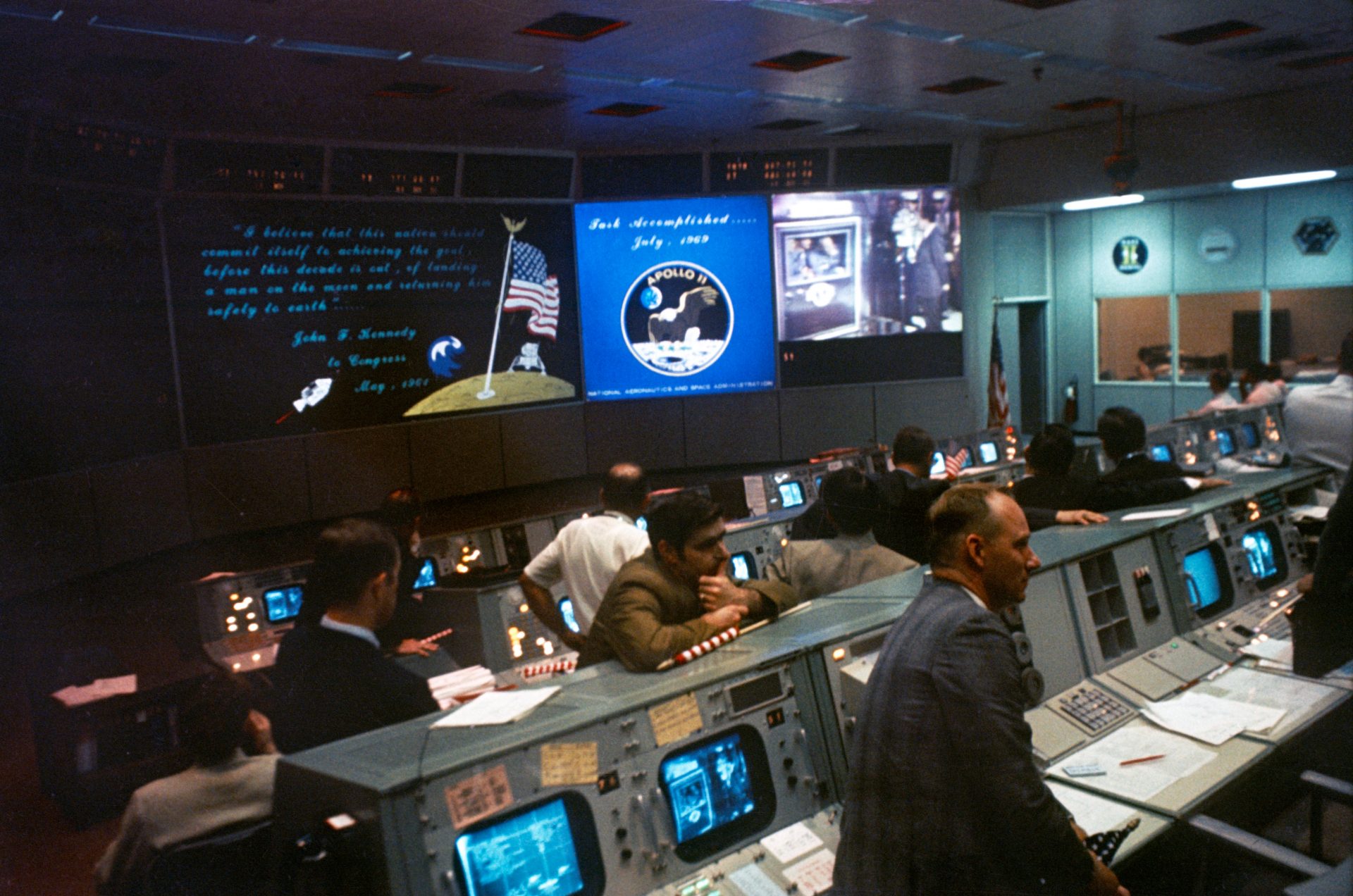 The film A.D. 1999 was produced by the Philco Ford Corporation on its 75th anniversary in 1967. The company produced household appliances, but was also active in military research and development since the 1930s. Already in the 50’s it built transistor-based computers. Then came tracking systems for guided missiles in the aerospace industry. And NASA commissioned Philco in the mid-1960s with the technical equipment for the Apollo flight control centre in Houston. This major order was the source of some of the technological ideas Philco presented on the occasion of his company anniversary. Philco-Ford also produced a range of consumer goods such as refrigerators, washing machines, televisions, pocket calculators, radios, phonographs, air conditioners, car radios and video game consoles. Computers control household appliances in films, a futuristic process at the time.

Ideas for the future

One can assume that the Philco managers were so proud of their NASA Apollo control room in Houston that they wanted to deliver similar equipment straight into every household. In fact, the film shows revolutionary ideas for the time, which are slowly but surely becoming reality in the world of the 21st century. And they must, because otherwise the replacement of fossil fuels will not be possible. The leitmotif of the film, the work on colonizing foreign planets, is thus still an expression of the visions of the 1960s. Today we urgently need these technological visions to lead our civilisation on our own planet into the future. The great ideas developed by the engineers as part of the Apollo programme still have some potential for solving these future challenges.